Guichen Bay and the Chinese Landings

Robe was a small and isolated community of about 200 people when it became the starting point for one of the most remarkable treks in Australian history. More than 16,000 Chinese left their homes in mainland China and landed in Guichen Bay during the late 1850s and early 1860s, after a long and difficult sea journey. They then walked overland through the bush for some 400 kilometres to reach the Victorian goldfields.

The first Chinese miners arrived in Robe in 1856, travelling by coastal steamer from larger ports such as Port Adelaide and Sydney. Then in 1857, they began arriving direct from overseas, with some 15,000 landing that year alone, creating scenes that would confound belief, even in today's world.

The story of why and how they came to Australia, and the events triggered in the small port of Robe is told in Guichen Bay and the Chinese Landings. Written by best-selling author and community historian Liz Harfull, this small book was published by the District Council of Robe in 2017.

The publication draws on extensive historical research and fact checking, in an effort to provide as factual an account as possible. Wherever possible, the information is based on primary sources, hoping to avoid often-repeated errors found in some previous accounts.

Hard copies of 'Guichen Bay and the Chinese Landings' are available from the Robe Visitor Information Centre for $10 each. 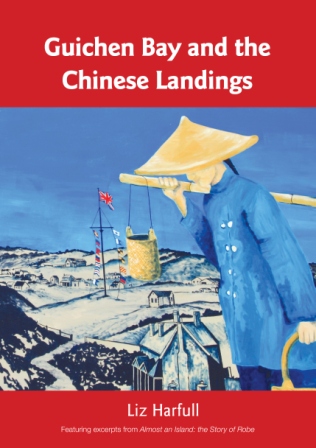