Recognised as having national heritage significance, Robe's cemetery reflects the area's rich and diverse history. The cemetery contains the graves of pioneering pastoralists, men and women drowned at sea, and emigrant settlers from across the world who came to Australia to make new lives. Among them are people associated with prominent figures such as the Lea family, famous as the manufacturers of Lea and Perrin Worcestershire Sauce; South Australian Police Commissioner Alexander Tolmer, who led the gold escorts that saved the colony's economy during the Victorian goldrush; and Melbourne businessman and philanthropist, Sir John Grice, who cut his business teeth at Robe, managing the local shipping house.

Visitors can explore some of these fascinating stories through a dedicated website and a smart-phone app created by the Robe History Group, working in conjunction with the community as part of a project called Tombstone Tourists. To find out more and download the app, visit https://robewalk.com/

The cemetery is situated south of the town, off O'Halloran Street, on what was known as "the Glebe" - an old-English term for land belonging to, or yielding revenue for, a parish church or clergyman. Covering eleven acres of "good grassy land", the Glebe was mapped out as part of the original survey of the town in 1846. Robe historian, the late Kathleen Bermingham, who had a poetic turn of phrase, referred to the cemetery as the Glebe on God's acre.

A striking feature is the stone wall built in 1857-58, after local shipping merchant George Ormerod offered an interest free loan of £300. The contract was awarded to George Hales in partnership with Scottish builder George Shivas, who also constructed the obelisk. However most of the actual labour is believed to have been done by talented Devonshire stonemason, Levi Cooper, who is honoured with a plaque erected near the gateway into the original section of the cemetery.

The earliest known grave is that of wealthy pastoralist and horse breeder William Vansittart, who died in a riding accident in 1854, when he was 36. His £10,000 estate was used to endow a scholarship at St Peter's College in Adelaide.

Vansittart was not the first European buried at Robe, with newspaper clippings reporting the burial of an unknown female from the wreck of the Thomsons in September 1849, followed in December of that year by resident Mary Kelham, wife of the 81-year-old postmaster, Captain William Kelham, a veteran soldier who fought against the French under the Duke of Wellington. The site of these graves is not known. A significant number of other graves are also unmarked.

The most prominent memorial belongs to the Crowe family. Some mystery surrounds the background of Edmund Crowe, an Irishman with a love of horses and racing who settled on Mount Bruce station, east of Robe. His eldest daughter, Minnie, was killed in a riding accident in 1872, at the age of eighteen. To honour her memory, Edmund ordered a monument of finely wrought bluestone and Italian marble from Chambers and Clutten of Melbourne.

Edmund was buried in the cemetery a little over a year after his daughter, having died from pneumonia at the age of 54. The vault also contains the remains of his wife, Johanna, who bought Mingbool station near Mount Gambier about four years after her husband's death, becoming a wealthy pastoralist in her own right. Her descendants still own the station, which holds amongst its trophies the 1911 Melbourne Cup.

The historic section of the cemetery was officially closed to burials in 1970. In 1983, it was listed on the Register of the National Estate, which noted the high value of its historic integrity. 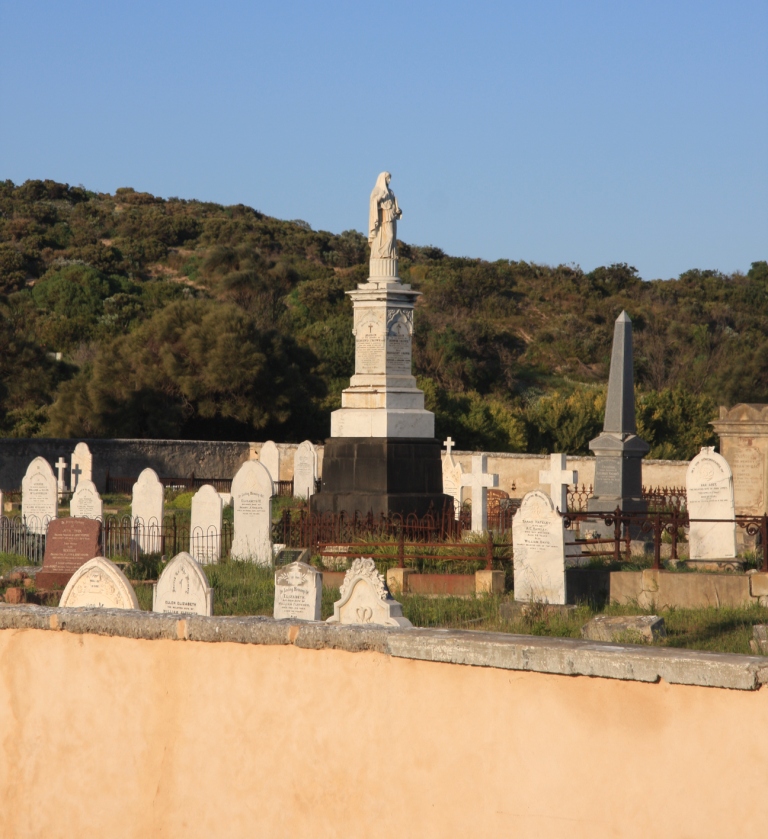